The Diving-Bell And The Butterfly 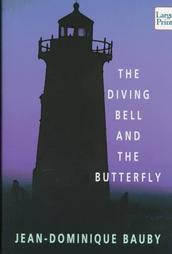 I felt embarrassed, ashamed and humiliated when I made my mother read one of my recent posts on this blog a couple of days back; embarrassed not because I had written something that she wasn’t meant to read, but because I found some glaring flaws in the post as she was reading it aloud. Some misplaced/missing words, some grammatical errors that made think of the people who must have read that post and chuckled (I mail my new posts to at least two dozen people), but were kind enough to reply with comments similar to “well-written” and some even posted comments on the blog. It took me a couple of hours to correct the post, but took me the whole night to get over the shame; making me think of excuses for such a lapse; my mind working faster than the two fingers of my right hand or maybe I should’ve read it aloud before posting it and many such things. The worse I feared was that I won’t be able to get back to blogging for a few months until this event remained fresh in my mind.

But as you can see that it was not to happen and I am back here writing. Things changed when I got a courier with a book titled The Diving-Bell And The Butterfly by Jean Dominique Bauby yesterday.

I was explaining the speciality of the book to my father; “it is the autobiography of the French editor of Elle, who dictated it just by batting his left eyelid after suffering a paralytic stroke”, and here I’m sulking about my two stiff fingers of my right hand that won’t move at the speed of my thoughts.

The book is a remarkable memoir of the author’s life in hospital after he suffered the stroke or locked-in syndrome. It is anecdotal and describes how he feels being in the cocoon of his body. It isn’t all that gloomy as I make it sound; there are a few really hilarious passages where he talks about hospital staff, some rude, some indifferent and some being a nuisance.

Somewhere before the end of the book Bauby tells us that he wishes to write a play where the hero suffers from locked-in syndrome and goes through all that he has experienced, in the climax he gets up from his bed and exclaims something like; “Shit! It was just a dream”.

A slim book (133 pages) with large fonts, this is the first book that I could finish in matter of hours.

If you are interested in knowing where I got to know about this book, just read the first comment on this post by Jai Arjun Singh

A detailed review of the book from The New York Times. (Free registration required).

And, thank you HCP for getting the book for me.
Posted by Paresh Palicha at 5:45 PM

Hey seriously why worry? I have always advocated read the intention not the language...gauge the point of view not the grammar. I am the last to even bother about this...what’s the use if everything is in place but the heart....your heart is in place....mission accomplished.

dear paresh ,
i too feel grammar is just a framework deviced by humans for construction of text ,creativity communicates at times beyond the rigorous boundaries of syntax ,ultimately the idea is whether the message meant to be conveyed has been so and in your case it is an yes ,so forget grammar .
the diving bell was an eyeopener indeed ,you too are a great example ,and hope one day i see your name under a title
bye
harimohan

Paresh, don't worry about grammar and spelling. We all know you can write. So write what is in your mind and forget about the trivial things. As Vasan rightly said, it is the thought that counts.

HM: Thanks - and the book is surely a must-read.

Alexis: Sir, I consider you my role-model, so I strive to achieve your kind of perfection. But, I always fail :) And, I find refuge in the saying; "Striving for perfection is a waste of time". Thanks.

Shame at making mistakes ??? I am begining to wonder if you are aspiring to be a writer or an editor... in defense of all editors.... please do not put them out of a job!! ....that is if you are planning to present only perfectly written pieces!!!!

Like all the others before me...the idea is to get your powerful ideas across to people and you do an excellent job of that...please leave the editing to the editors of the world!!

Would love to read the book you mentioned sometime.

Suchitra: Teacher, I'm just learning to write; if I aspire to be an editor, it'll take me another lifetime. :)

I was just talking about blogging, where I write myself & proudly mail it to all of you, thinking that it may interest you. I'd be ashamed if I discover mistakes.

All your comments give me the strength to continue writing even after making mistakes.:) Thanks.

Never Complain for what you lack nor do one have to fear about being inferior.

Mistakes be it grammatical, physical or mental we all have to absorb them and try to rectify those the next time. If one can have utmost pride while blushing for his/her good work, then why not can't have a little guilt (and not disgust) while blushing for their blunder.

As for The Diving-Bell and the Butterfly. I came across this book during an online search for Writer who got disabled due to an accident. I read about him in Reader's Digest but my memory with name was bad and i somehow connected that name to be French!!!
Thus i found this book and ordered it. But alas! didn't find the person whom i was looking for until i came across your blog a few days ago.
In him i saw the Powerful Drive of Determination. He had everything and then lost it all in a moment's flash but today he has achieved almost everything that a mortal can achieve. Respect, love and honor.

He might not be able to ride a BULLET or a YESDI but still he is CRUISING beautifully in the Highway called Life.

Like he quoted about WG Grace in his blog,"Once W. G. Grace, the famous English cricketer, was given out early in a county match. He refused to go out as he said, “They’ve come to see me bat, not you umpire. Play on!”

I quote from my inner-voice
"The world is here to watch and learn the battle that Alexis won against fate and not to criticize it. God Bless you Alexis!"